Greek culture with gastronomy and music in Amsterdam

On 09-09-2017, the first Greek Music Festival in Amsterdam was organized by the music radio show “Hellas Pindakaas”, the first and only Greek language radio show in the Netherlands, which was celebrating its 5th anniversary and more than 230 hours “on air”.
The festival was honored by the presence of almost all musical groups and artists who have been hosted on the show, from “rembetika”, to electronic and modern rock. The artists who performed were not only Greeks but Dutch as well. Because Dutch people love Greece and they prove it with action.

The sponsor of the program and of the festival is “Lato” the first official Centre for Greek Culture in Amsterdam. From the beginning Lato shared with Hellas Pindakaas the same vision and together they work to spread the Greek culture and get people to know Greece like a few people do. We forget the worn out touristic Greek profile that everyone knows and we come to share with everyone the uniqueness of Greece through Greek language lessons both in the Netherlands and in Greece. Apart from this, through presentations and thematic evenings all over Amsterdam Lato helps people from the Netherlands to learn about new places in Greece, learn about local customs and Greek culture and gastronomical travelling as well.

Member of this great team was “GnC gastronomical events”. A company established in the last 2 years in the Netherlands, a fantastic team of chefs with great vision on Greek cuisine initiated not only Dutch but also Greek people living in The Netherlands in the emerging Greek gastronomic scene. The intention is to present products and flavors from a new optical angle and give Greek gastronomy a new image and a fresh presentation. Especially for this festival GnC included new products from small producers in the menu, which were transformed into a finger food that accompanied Greek wines and tsipouro.

The experimental mansion Down Village with her Black Garlic products from mt. Pelion, aged kasseri and smoked feta cheese from the dairycompany Karakanas in Velestino, smoked herring from Volos, Berryland with biological spreads of small fruits and superfoods from Chalkida, salsisi and loutza from Kritokos on Tinos Island, extra virgin olive oil from Ellion from Chalkidiki And Piliaki Gi with her special marmalades from Pilos dressed in a gastronomical way this year’s festival and promised a new series of events which will take place in the coming months, in order to connect and lead the way to people who love Greece and its real gastronomical -and not only- culture in the center of Europe. 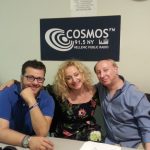